I learnt to dive when I was 15, back in 1976. It was something that I had wanted to do for several years, and now I was finally old enough. After a medical examination and a chest X-Ray, I was cleared as fit to dive, and I could start my diving course.

A school friend, John Chadwick, had completed his dive course with his cousins up in Terrigal, and I wanted to joiin him in the water. I completed my "C" card with Australian Oceanics (later to become Melbourne Diving Services). Dick Whittaker lived up the road from me, so that made doing the theory sessions and the exam in his living room very easy. The pool sessions took place in the Nunnawading Swimming Pool, and included a long swim and treading water for, from memory, fifteen minutes, and also included ditching our gear, leaving it on the bottom, and then swimming back down and donning the gear again. From memory, open water sessions were conducted at South Road and Rye. 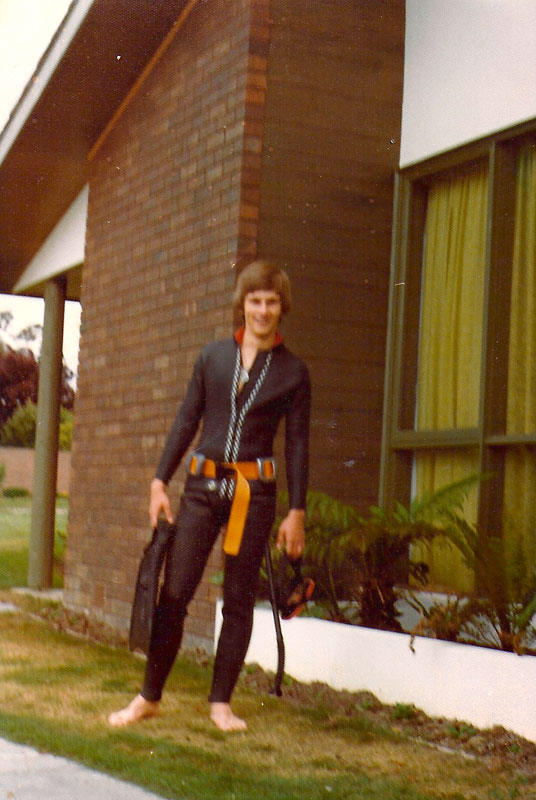 This is me, in my "shark skin" wetsuit.

The wetsuit was made by Abalone (an Australian company that still exists, but now no longer makes wetsuits - they use neoprene wetsuit material to make stubby holders instead). The trousers were high-waisted, and the top included a tail that came down between my legs and locked into the front of the top using a couple of twisting pins (you can see one of them just below my weight belt. The rubber is bonded to a layer of nylon on the inside, but the outside is just black neoprene in a fish scale pattern.

SCUBA was much closer to snorkling back then. We used full-foot fins, without boots. We didn't use bouyancy compensating jackets. One of my instructors actually had a pressure guage - a stem guage that stuck out at the end of a barrel, with the amount that projected from the end indicating the pressure in the tank. The only time I had come across something like that previously was in a petrol station where the tyre pressure guage worked in the same way. Most of us didn't use pressure guages - we were using J-valve cylinders, where there was a "reserve" lever that we could pull down to give us access to the last few hundred psi in the tank. If we got to the point where we had to pull down on the reserve lever it was time to leave the water...

My equipment back then included a Seiko 6105 dive watch, a 72 cubic foot J valve aluminium tank and a "SeaBee" regulator made by Jim Agar's Airdive Equipment. Eventually I lashed out and spent $80 on a pressure guage. Most of my gear was bought at Hoath's Sports Store in Station Street Box Hill, or around the corner at Box Hill Ski (during the Summer the name would change to Diver's World), where I eventually worked, selling dive gear. All of my diving around this time consisted of shore dives in Port Phillip, mainly around Mornington, Mount Martha, Flinders, and Rye. Gary, the apprentice at our local butcher shop, was a diver, and as he had a driver's licence it meant that he was a great dive buddy. Scallops and Abalone were reguar catches on our dive expeditions. Even now I can remember the smell, and taste, of thinly sliced BBQ Abalone. Summer holidays led to opportunities to combine sailing and diving at John Chadwick's parent's beach house in Mount Martha.

Study, and a girlfriend, meant that diving was curtailed during the last year or so of high school. When I started at Burwood Teachers College I was able to join their diving club, and do a few dives, but it wan't until I started working at Box Hill Ski / Diversworld, in 1982, that I was really able to spend a lot of time in the water.